The Hangover Part II  that a 2011 American comedy film and is the director Todd Phillips’ follow-up to his 2009 smash hit “The Hangover,” which became the highest-grossing R-rated comedy of all time and also won the Golden Globe for Best Film – Comedy or Musical. Bradley Cooper, Ed Helms, Zach Galifianakis, and Justin Bartha star in the film, reprising their roles from “The Hangover.” The main cast also includes Ken Jeong and Jeffrey Tambor, who also return from the first film, and Mason Lee, Jamie Chung and Oscar® nominee Paul Giamatti, who join the ensemble cast.

Two years after their escapade in Las Vegas, The Wolfpack is about to travel to Thailand to attend Stu's wedding as he is getting married to a Thai woman named Lauren. Instead of having a bachelor party, Stu decides to have a bachelor brunch which upsets Phil. But Stu doesn't want to invite Alan because of the previous bachelor party but Doug talks him into letting Alan go. The Wolfpack arrive in Thailand, but then go down to the beach from the hotel. There they have a bonfire and beer with sealed bottles, where they also bring along Lauren's younger brother, Teddy as they toast to Stu and Lauren's future happiness. The next morning, Phil, Stu, and Alan wake up in a dirty hotel room in Bangkok with a drug-dealing Monkey and Chow, Alan's head is completely shaved and Stu has a copy of Mike Tyson's tattoo on his the left side of his face. Doug calls Phil and tells them that he left early with Tracy and he finds out Teddy was with them last night because he found Teddy's severed finger in a bowl of water. Chow is about to tell them the events of the night, but his heart stops after snorting a large amount of cocaine. The trio take Chow's body up to the 15th floor and put in the ice machine. But the trio still has to find Teddy as they look on the roof of the hotel, but he's not there. The trio then roams through the streets of Bangkok, looking for Teddy until Doug tells them that Teddy got arrested, but turns out to be a monk with Teddy's sweatshirt. The pack then takes the monk back to his home as Alan has a epiphany as he tells the two that they need to go to a strip club as the only clues they get us that Teddy bought drinks for everyone and Stu had anal sex with a transexual stripper. The pack are then threatened by two Russian mobsters to give them the monkey back as one of them shoots Phil in his arm. Phil is then taken to a hospital and he would of died if he was a foot to his left, Alan then comes clean and tells the guys that he drugged the marshmallows with his ADHD medication and muscle relaxants as he wanted to knock out Teddy for a while as Stu gets furious and attacks Alan but Alan said he only did it because Phil and Stu are his best friends. Phil then notices a address written on Alan's stomach as the pack go to the address but turns out to a hotel and a meeting with a man named Kingsley as he tells him to bring Chow's bank code and password and in return, he will give them Teddy. The trio then goes back to the hotel and find out that Chow isn't dead as they tell them about the plan, but he tells them that he put the bank codes in the monkey's vest. The pack then goes to the monkey's location and kidnap the monkey, but they get caught by the mobsters which leads to a vicious car chase. The pack then drops the monkey off at a Bangkok vet since it was shot by one of the mobsters. The pack then goes to the hotel as they give Kingsley the bank code and password, but only to have Chow getting arrested and Kingsley tells them that they never had Teddy and they just used that as information. Phil then calls Tracy about the previous events of the night and that they lost Teddy. Stu then has a epiphany from the power outages of Bangkok, the game machine Alan was playing, the ice machine, and Teddy's finger as he tells the guys that Teddy is trapped in the elevator of the hotel they woken up in. The pack then has to find a way to get to the wedding but Teddy remembers that he has the keys to Chow's speedboat "The Perfect Life" as they make in time, only for Stu to show Lauren's father that he isn't some boring dentist and that he has a "demon" in him, he's really wild, and that he took on Bangkok with his friends. Stu and Lauren get married and Alan gives him his gift which is a musical performance from Mike Tyson. Teddy tells the guys that he recharged his phone and found pictures from the night before as they look over the pictures with Mike, only agreeing to delete the evidence after. 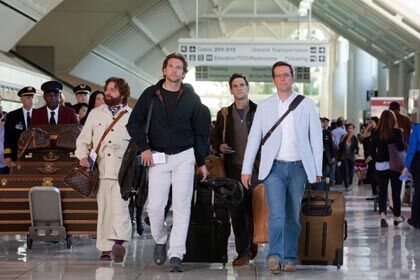 Retrieved from "https://thehangover.fandom.com/wiki/The_Hangover_Part_II?oldid=7041"
Community content is available under CC-BY-SA unless otherwise noted.